In what time frame are we going to execute the project? What milestones are there?

The Time Planning Process deals with estimating the amount of work needed to complete the work packages and activities that were defined in the work breakdown structure.

1. Collecting and reviewing information for the development of the time schedule

Planned content from nearly all knowledge areas goes into the project plan that is developed based on the work breakdown structure. Therefore covering the content precisely and in its entirety is of high importance here.

Milestones are project results, which have neither costs, nor running time. They mark the completion of key deliverables. Quality gates include reviewing the delivered results, evaluating existing risks and problems as well as the project progress.

Dependencies of work packages and activities need to be identified. Subsequently the dependencies need to be assigned. This step aims at developing a reliable time schedule as well as identifying the critical path.

4. Developing a method to determine total amount of effort

This involves developing a method to estimate the total amount of time and effort needed to complete a given task.

6. Developing a process to track the actual amount of performed man hours

As a rule either the project manager or the project management office (PMO) is responsible for documenting the data relating to the necessary effort that tasks require to be completed. Persons that deliver the information, are usually team members or team leader representatives.

There are three types of interrelations or dependencies, that determine the order of activities: 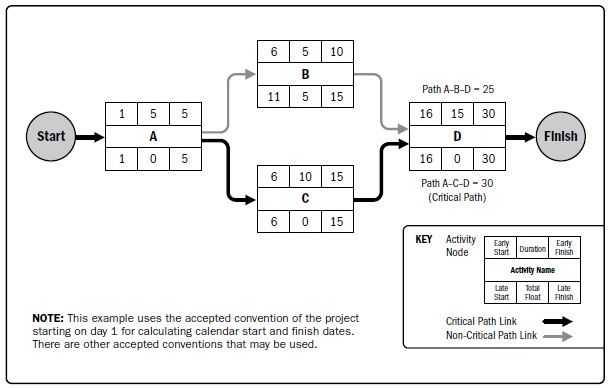 Total effort estimation can be understood as the estimated value for total amount of resources and time required to complete a task within the project. Effort planning is the basis according to which dates are decided, costs and capacities are calculated and business cases are developed. An estimation becomes possible, through dividing the project into many different parts and work packages. The smaller the work packages are, the more precise the estimation can be. Problems arise usually through: 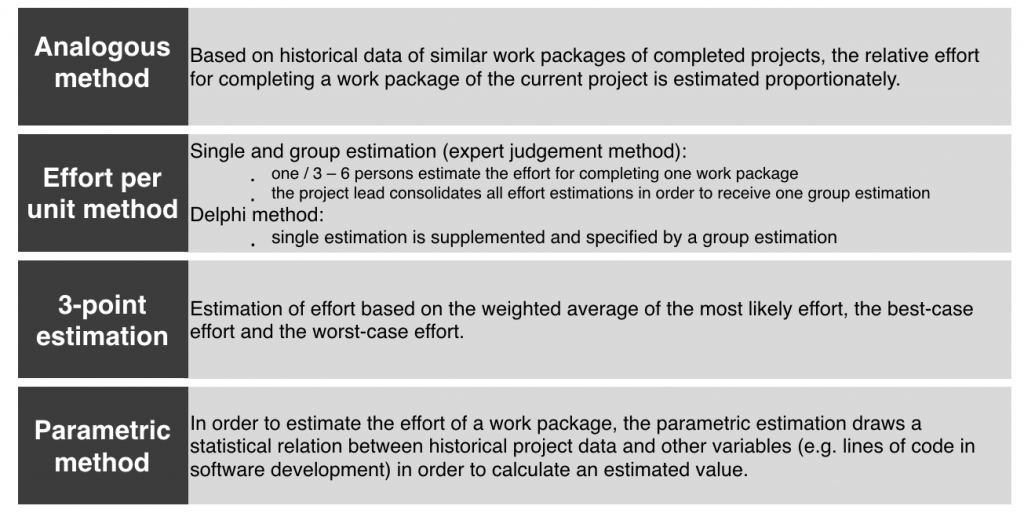 The work packages of the current project are compared to historical data of already completed work packages. Based on this information the effort is calculated.

Expert judgement is the most common estimation method nowadays

The project manager prepares a template providing an overview of all work packages. This template serves as the basis for the expert judgement.

Each expert receives one template.

The experts estimate all work packages listed in the template. All templates are collected and evaluated by one person. The estimated values are not to be discussed.

If there is a discrepancy of >20 % between the single estimates, the estimates are commented by the project lead and he returns the templates to the experts in order to reassess the estimates

The experts review their estimates and give a new estimate considering the project lead’s comments.

Only if a consensus is found between the single estimates, an additional effort of 10-15% for project management is added and the estimation terminated.

The 3-point estimation is an estimation of the effort based on a weighted average of the most likely effort, best-case effort and worst-case effort. For each work package three effort estimations are conducted:

In addition, it is possible to calculate the probability of occurrence of the estimate: 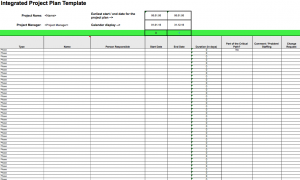